The Introduction and Application of DALI & DALI-2

With DALI, the broadcast option is also available; in addition, with simple configuration, each DALI device can e assigned a separate address, allowing digital control of individual devices.

Furthermore, the DALI devices can also be programmed to operate in groups. This provides excellent flexibility since the lighting systems can be reconfigured by software reprogramming, without the need to change the wiring. Different lighting functions and moods can be achieved in different rooms or areas of a building, and then easily adjusted and optimized.

The digital nature of DALI allows two-way communication between devices, so that a device can report a failure, or answer a query about its status or other information.
Wiring is relatively simple; DALI power and data is carried by the same pair of wires, without the need for a separate bus cable. The polarity of the wires does not have to be observed, in contrast with 0/1-10V systems where wiring errors are common.
What is DALI-2?
DALI-2 is the certification program which is based on the latest version of the DALI protocol, and is developed and maintained by the DALI Alliance.

The IEC 62386 standard was restructured in late 2014 for ease of use and to faciliate the development of DALI-2. Many improvements were made to the standard including the addition of new commands and features. One of the most significant changes was the addition of control devices (including application controllers and input devices), which were not included at all in the original version of the standard.

DALI-2 also includes much more comprehensive testing than DALI version-1, with a strong focus on device interoperability. DALI-2 test results are independently verified by the DALI Alliance before certification is granted. 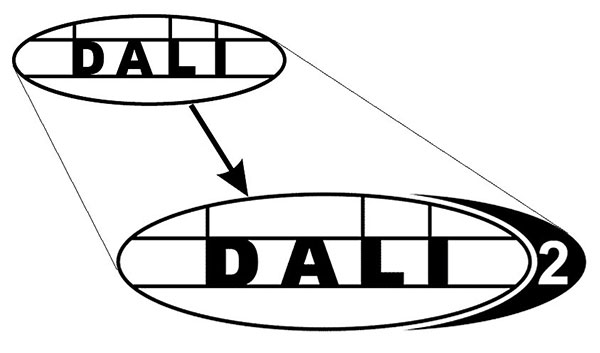 DALI V.S. DALI-2
DALI is an industry-standardized protocol for lighting control. The protocol is specified in the multi-part international standard IEC 62386, as well as in specifications written by DiiA.

DALI-2 refers to the latest version of the DALI protocol.
Compared with DALI version-1, there are many new commands and features in DALI-2. While DALI version-1 only included control gear, DALI-2 includes control devices such as application controllers and input devices (e.g. sensors), as well as bus power supplies.
DALI-2 is focused on interoperability of products from different vendors, and the DALI-2 certification program confirms compatibility of products with the relevant specifications. 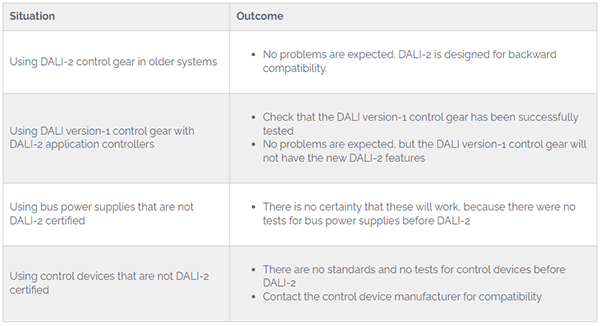